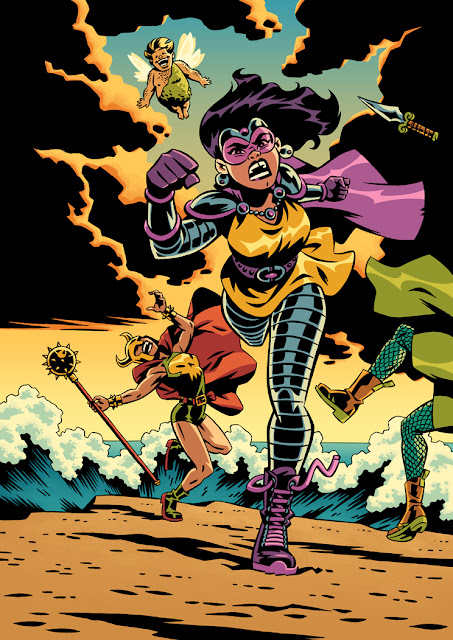 Posted by Fouad Mezher at 6:14 AM No comments:

It's not everyday you get to tell people you worked on a project like this. I was contacted by SelfMadeHero some months back about working on an anthology they were putting together. Given the particulars, I jumped at the chance. Ghost Stories of an Antiquary, Vol. 1, a collection of four stories by M.R. James, is adapted by Leah Moore and John Reppion. The other artists on this project are Aneke, Kit Buss and Alisdair Wood.

First up is the cover image for the title I worked on: 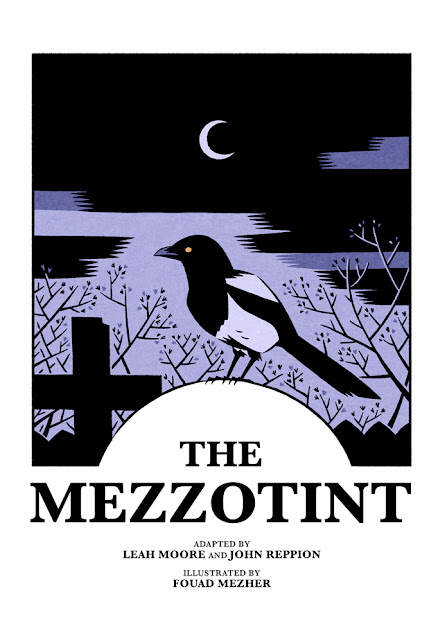 Secondly, working on this comic was a relatively unusual process for me. Given the writing's fidelity to the source material, two challenges came up from a visual standpoint:

1) Designing a layout that respected a wordy narrator, and:

2) Taking a group of stuffy, early-1900s academics (who love golf a little too much) and making each character look memorable.

Bellow are character sketches of our protagonist, Williams, and some of the fine gentlemen who help him solve the horrific mystery at hand: 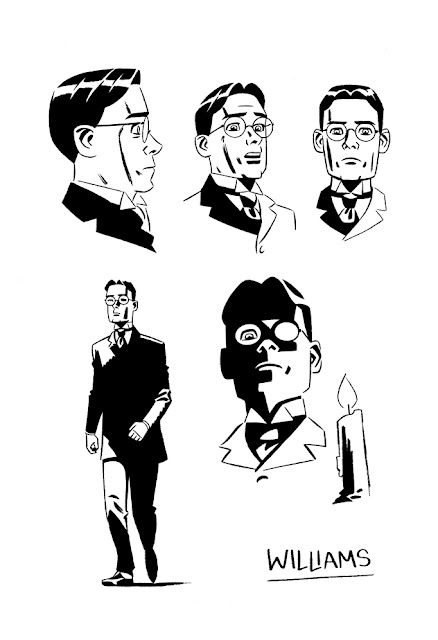 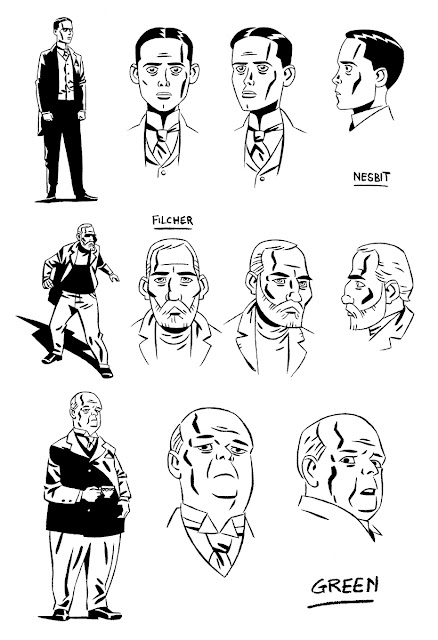 The most unusual aspect of the process on this comic was that I started by designing where all the text went and finalized that before doing any drawing. For that, I created layered spreads on Photoshop. This allowed me to move things around and simply replace the artwork under the text at different stages of completion. Bellow are examples of roughs (scribbled directly on Photoshop), final pencils (back on paper), and the final inks and colors (I ink directly over the pencils and then color it digitally): 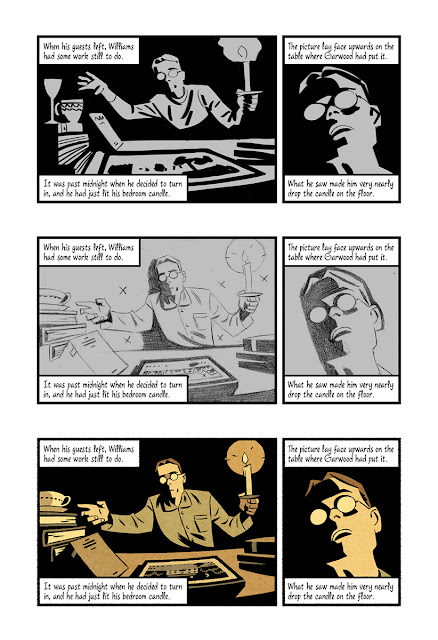 It's worth noting this was the smoothest working process I've gone through on any project, ever, and I'm particularly proud of how it turned out. It's rare that I can look at a comic months after the fact and not find something terrible to lose sleep over. I do hope however, that its horrors haunt readers into losing countless nights of sleep.
Posted by Fouad Mezher at 6:17 PM No comments:

This might be the most barf-inducing cute thing I've drawn that isn't a paid job, yet I find myself pretty happy with how it turned out.

For almost a year, this drawing remained unfinished and the sketchbook it's in untouched. Originally it was a sketch of a dead cedar tree but in warming up for a project I gave it another shot, and that’s where the monkey and all the red came in. 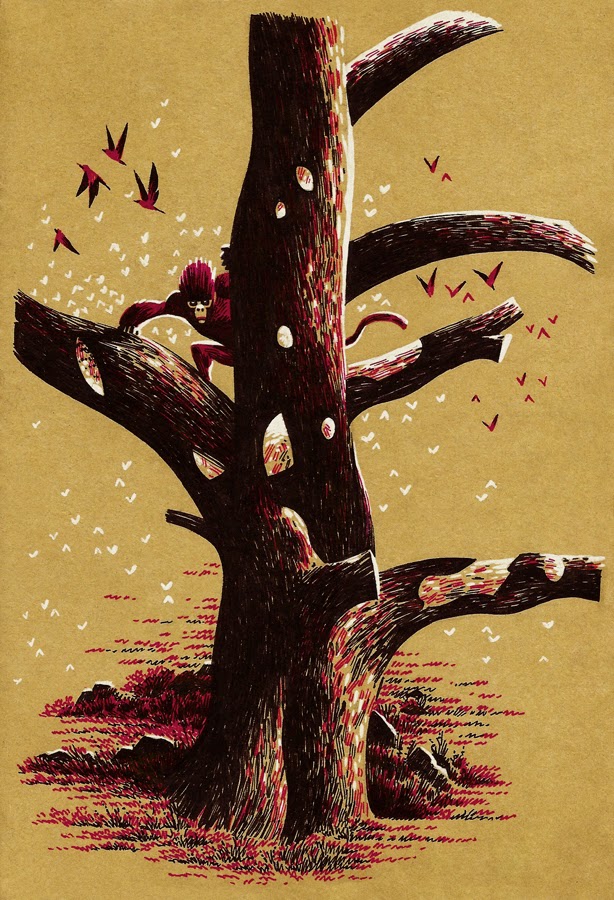 Posted by Fouad Mezher at 7:50 AM No comments:

Not much of a reason for this one other than finding the phrase funny-sounding. Stylistically, I was looking for a reason to ape R. Crumb and this seemed like a decent fit for that sort of exaggeration.

Posted by Fouad Mezher at 12:30 AM No comments:

The full comic is available online at THIS LINK courtesy of Risha Project. The idea for this comic's been in the ol' sketchbook for over a year now so a big thanks goes out to the guys at Risha for reaching out and suggesting a wordless comic. Below, is my favorite panel and an indicator of what the whole thing looks like: 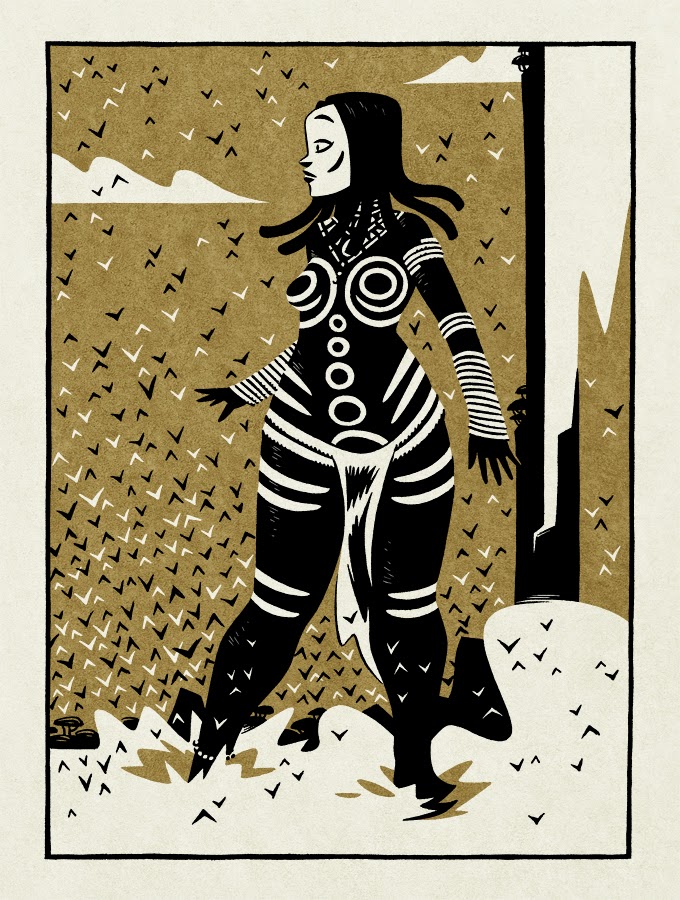 Posted by Fouad Mezher at 3:08 AM No comments:

Email ThisBlogThis!Share to TwitterShare to FacebookShare to Pinterest
Labels: Comics

Tales of the Inanely Mundane Presents

This was the product of a break taken while working on a comic. I started out drawing the mom character but ended up imagining it as a cover for a non existent story. Most of the text elements were drawn in with the intention of sounding as stupid as possible. Naturally, it turned out looking like something I'd probably enjoy reading...

Posted by Fouad Mezher at 4:58 AM No comments:

This was a warm up for a long, long project ahead. It took a little longer than expected as a red pen was lying around. The initial idea was to draw a futuristic sex-robot as envisioned by a futurist but I ended up dropping the outright robotic elements while drawing it.

This drawing also looks better while listening to this. 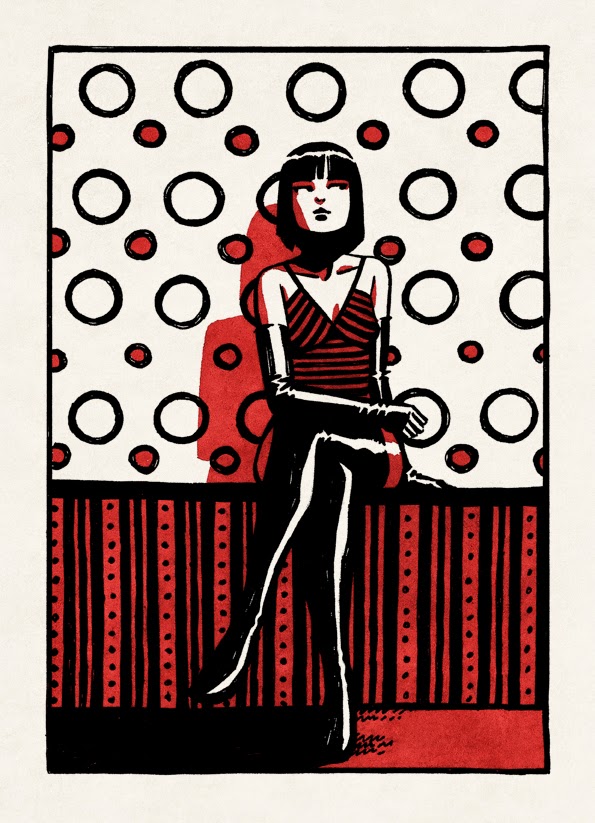 Posted by Fouad Mezher at 1:58 AM No comments:

Medusa's generally described as a monster possessing a hideous face but it seems to me that if one were to look past that (without turning to stone) she'd probably come across as a woman with serious personal image and self esteem issues. I realize this is the flip-side of the feminist adoption of her image but it couldn't be easy knowing that anyone who looked at her would be turned to stone.

I wasn't necessarily trying to get any of that across in this drawing but it's an observation. 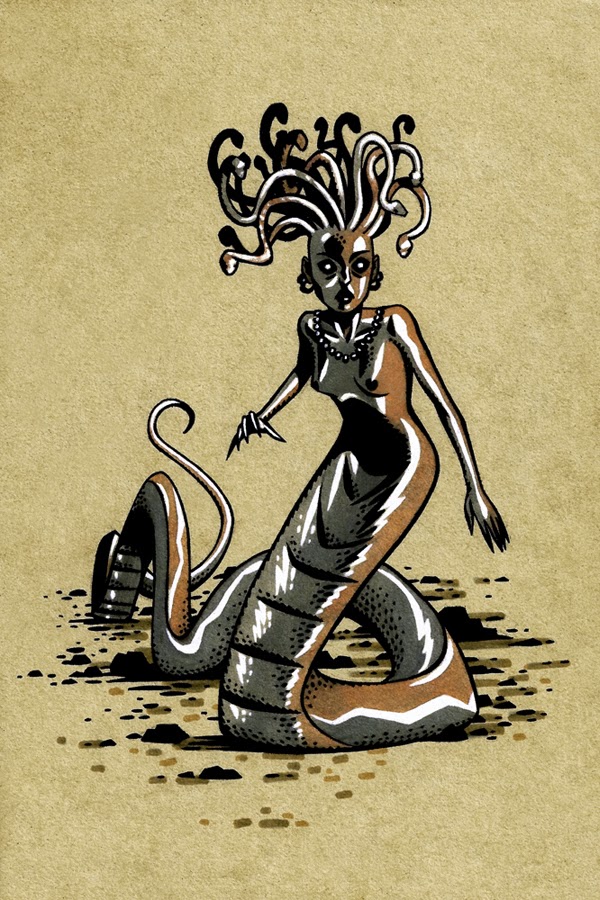 Posted by Fouad Mezher at 12:38 PM No comments:

This post is primarily an attempt to bring attention to the About Ebola app, developed as a response to inform the public following the recent outbreaks of the virus.

You can download the app HERE and read up on the development process HERE (this link provides proper accreditation to everyone involved). 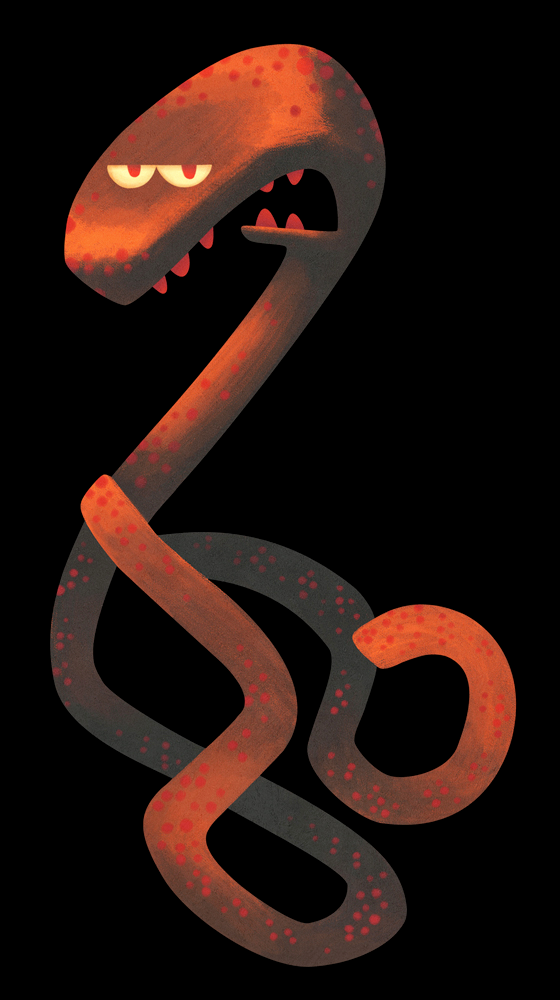 Posted by Fouad Mezher at 3:13 AM No comments: 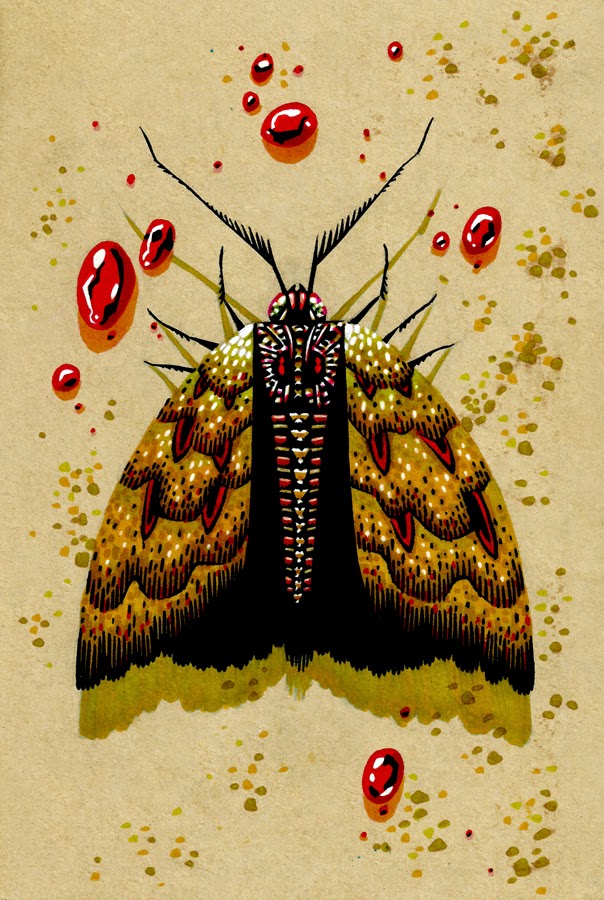 As I drew this, I had no idea that vampire moths actually exist. It occurred to me to look it up after finishing this drawing and they look nothing like this. If anything, they're more sinister looking...
Posted by Fouad Mezher at 11:36 AM No comments:

Some free time came up unexpectedly and I decided to use it wisely. I've been drawing most of my personal stuff on brown paper lately but something I had yet to try was the effect of colored markers on it. It had also been a while since I last drew an action scene... 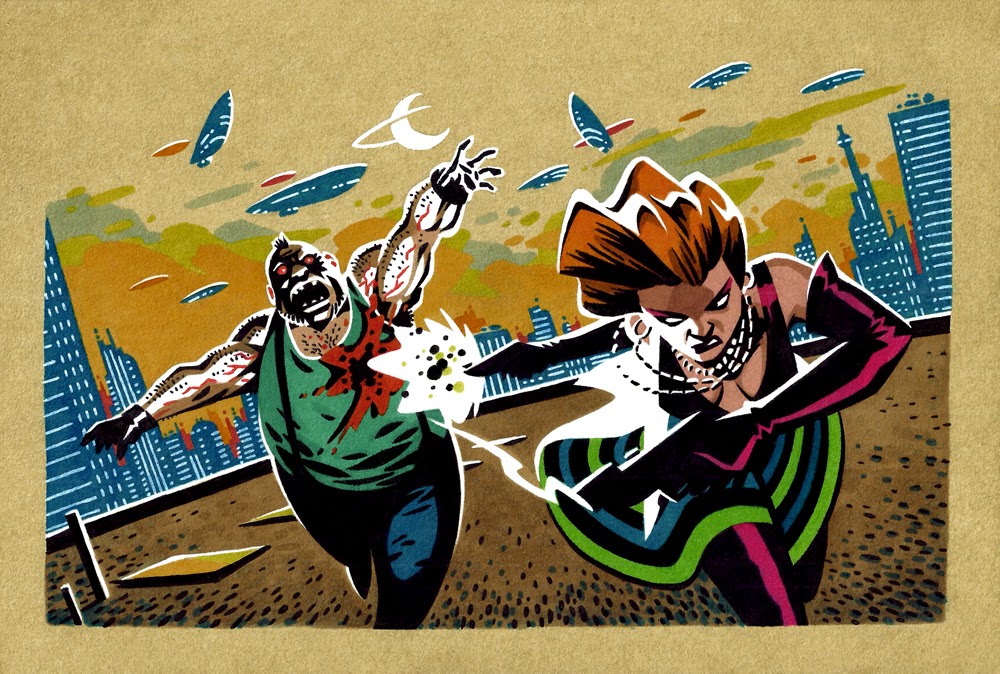 Update: Never been too fond of the original colors so here's a version digitally recolored a year later: 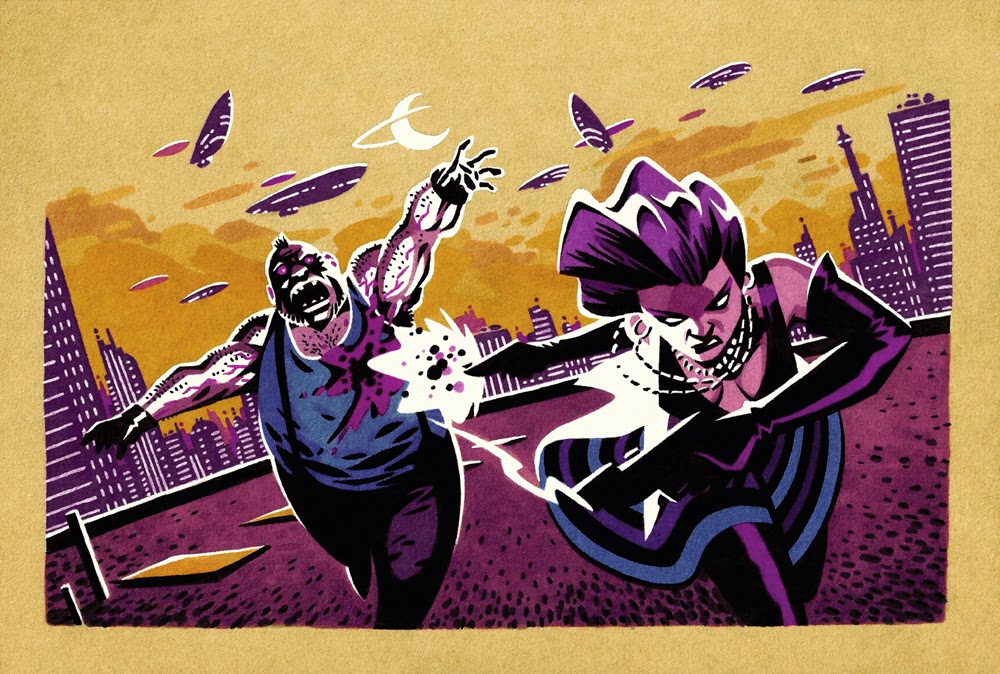 Posted by Fouad Mezher at 11:02 AM No comments:

Hopefully this doesn't turn into a running theme, but here's another post featuring a funny hat. The idea with this drawing was to create a context in which it would be acceptable to use a cardboard box as one.

Posted by Fouad Mezher at 11:35 AM No comments: 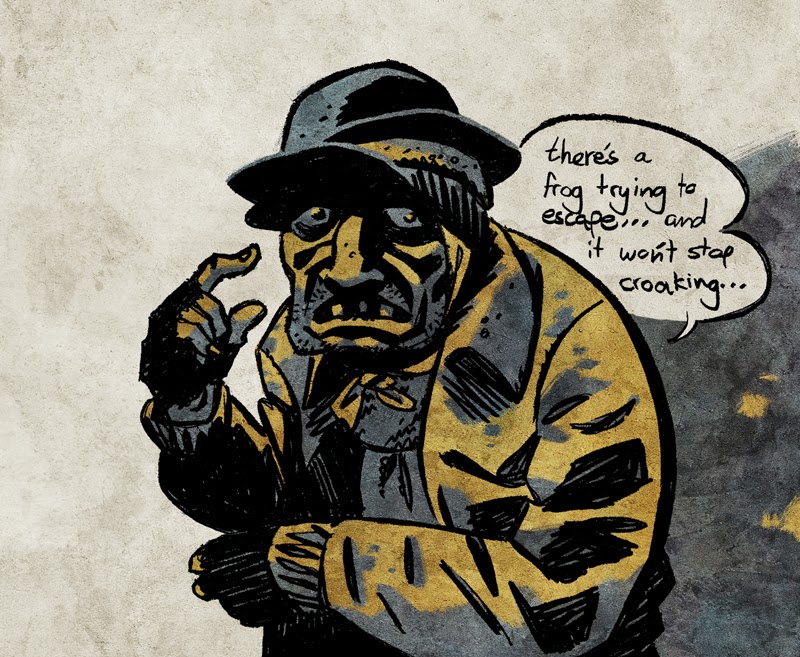 Posted by Fouad Mezher at 5:19 AM No comments:

Email ThisBlogThis!Share to TwitterShare to FacebookShare to Pinterest
Labels: Sketches 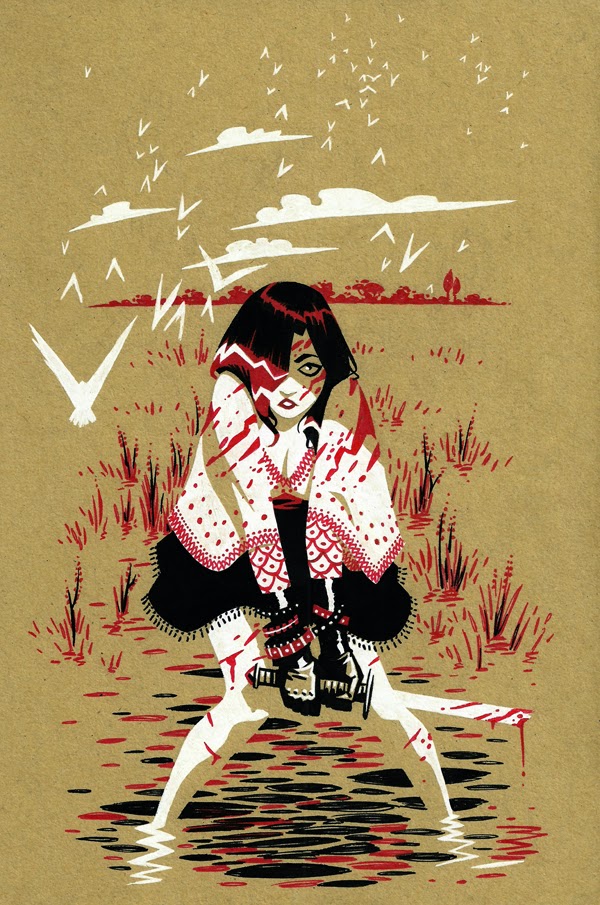 This started out as a very loose sketch with no clear intention of what to draw. The only mandate I placed upon myself was to try and suggest everything using shadows and forms rather than outlines. At some point, it seemed like a good idea to use a shadow to suggest an opponent's presence, and that led to the broken sword and blood.
Posted by Fouad Mezher at 1:39 PM No comments:

A Floating Head, Reptile Woman and Her Primate Stalker

Not much of a narrative to this post other than that I recently spent a lot of time in airports and on trains, and opted for the most laborious drawing technique available to pass the time. I'm pretty happy with how these turned out so I tried to get the scans to look as close as possible to what they looked like on paper. They're uploaded at a decent resolution so click on them for a better look: 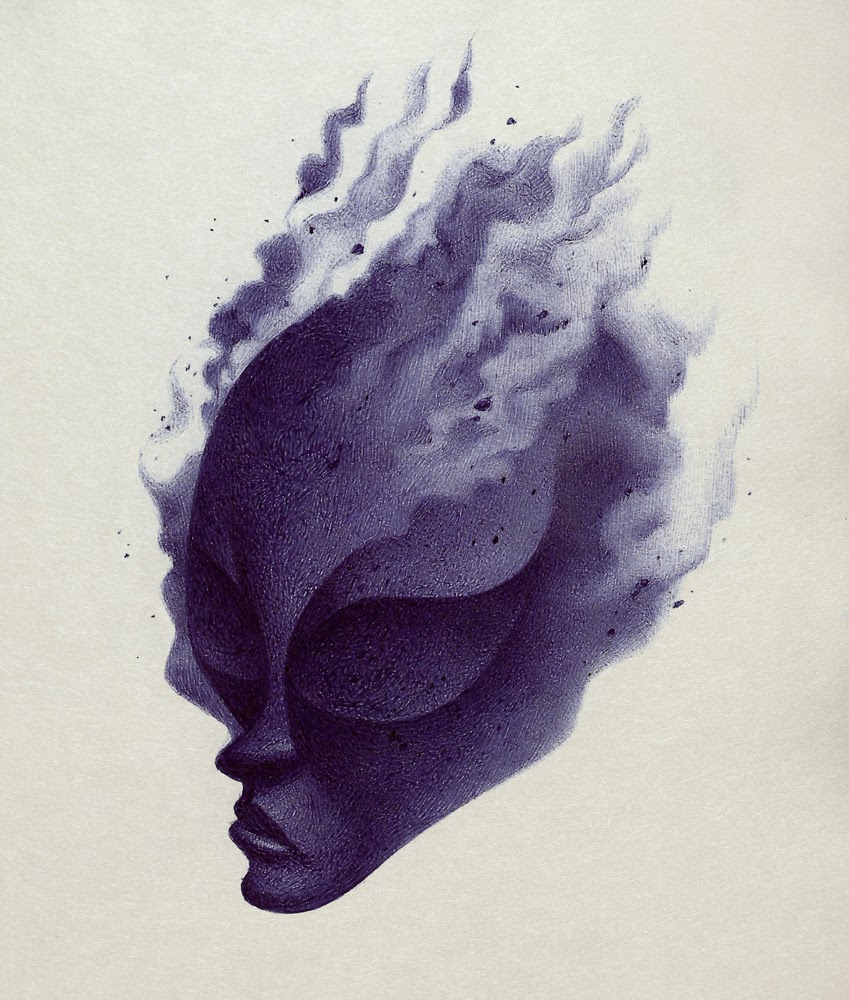 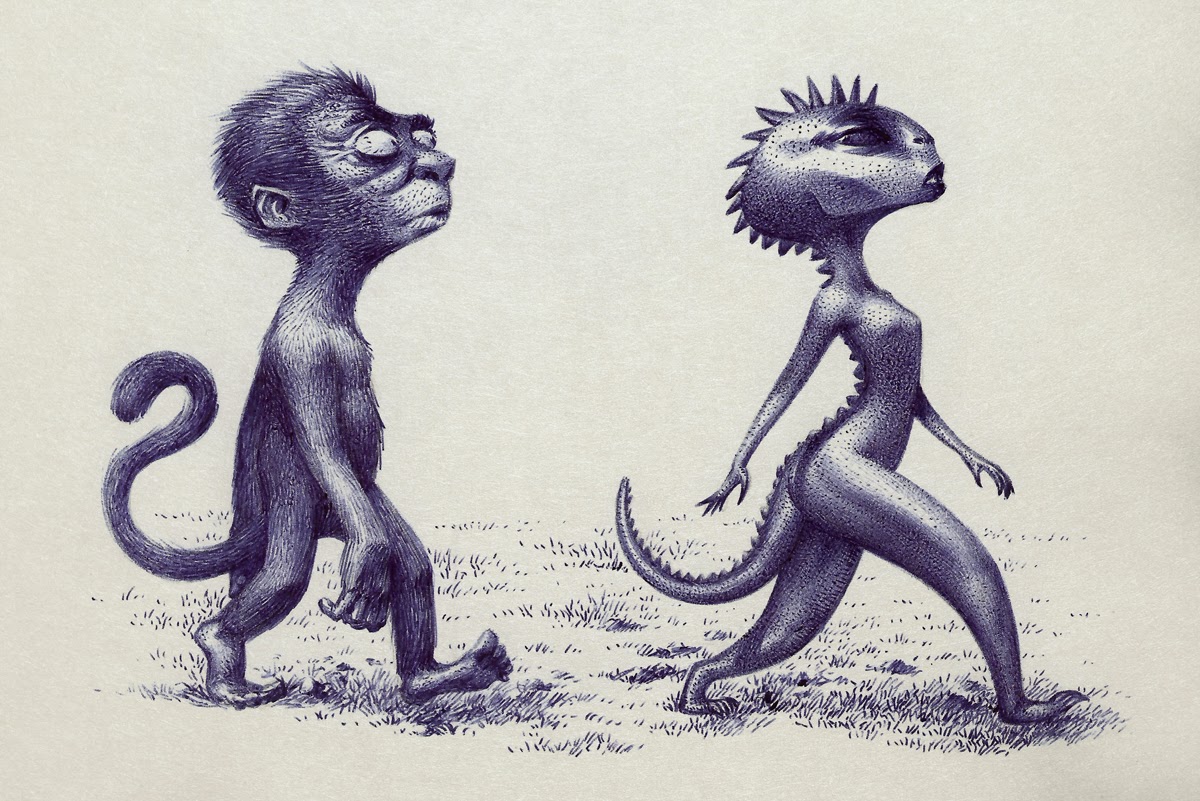 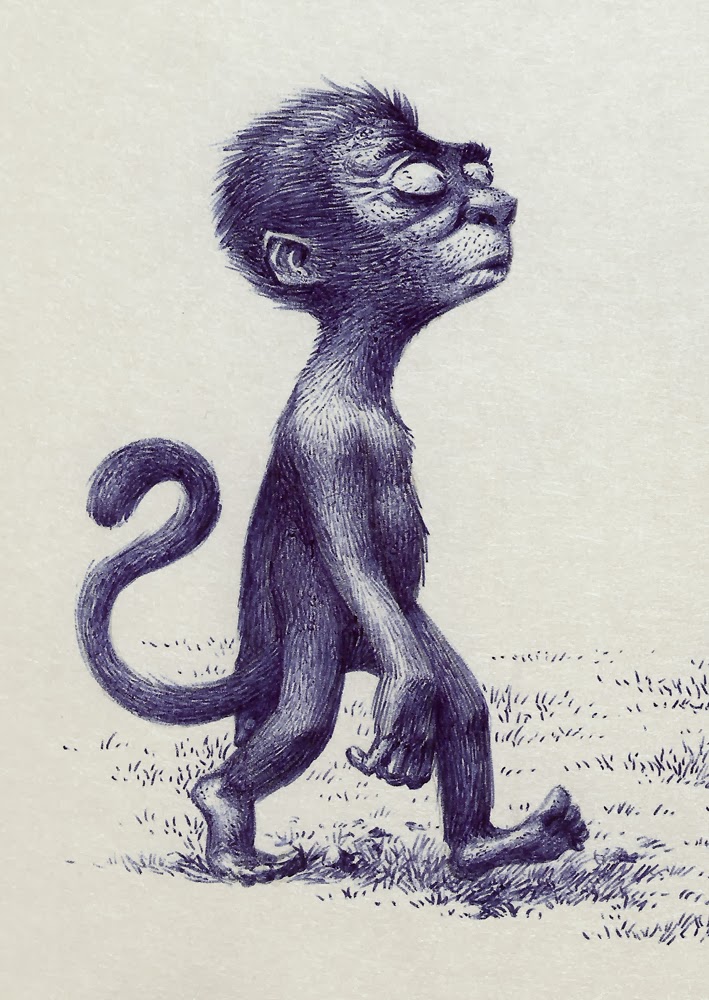 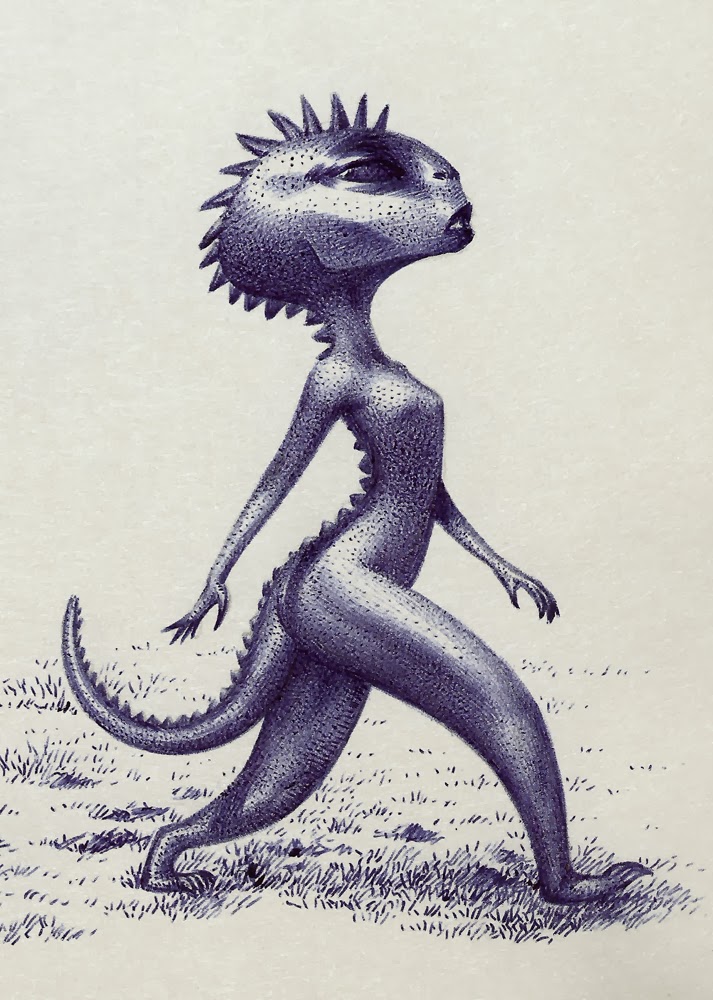 Posted by Fouad Mezher at 12:59 AM No comments: 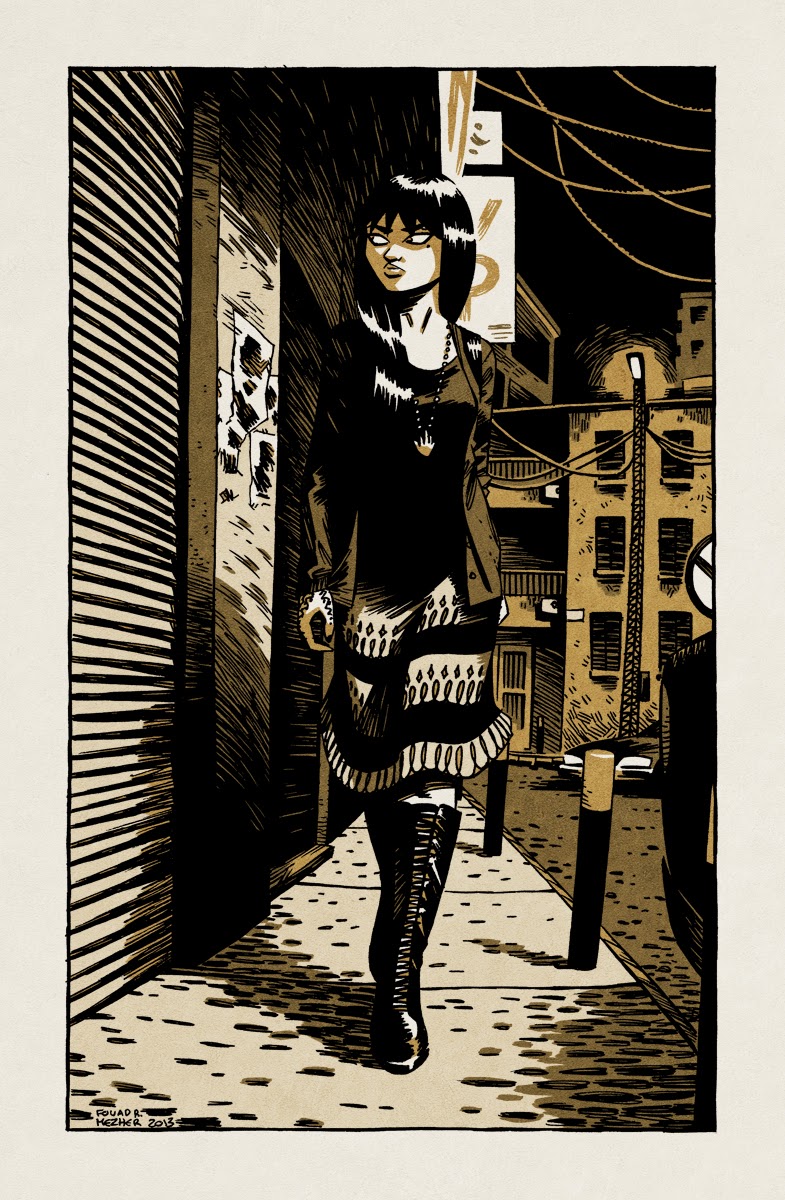 This post builds on the last one. I'm keeping the details scarce as there's no clear plan for this project at the time of this writing but it's a comic I'm hoping to get to draw sometime in the very near future. The look's pretty close to what I have in mind but the character and the story have changed some more since then. With every draft I write, I end up filtering out whatever happy things remain and at this point, it doesn't feel like the kind of story that could sustain a yellow tint at all times. I do like this color scheme though, so here it is posted. 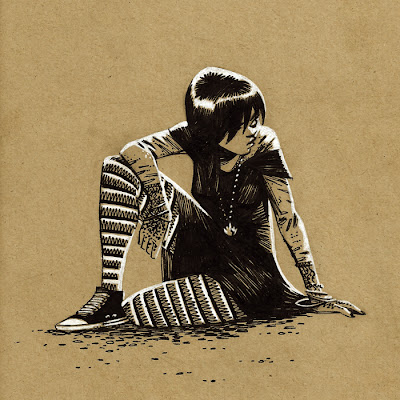 Posted by Fouad Mezher at 11:34 AM No comments: 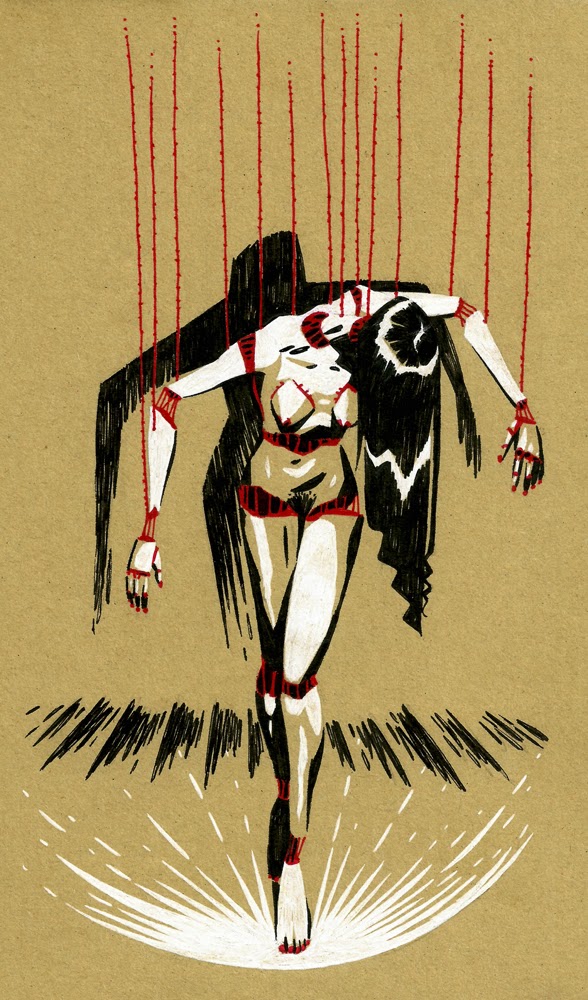 Mime Kids on a Tree 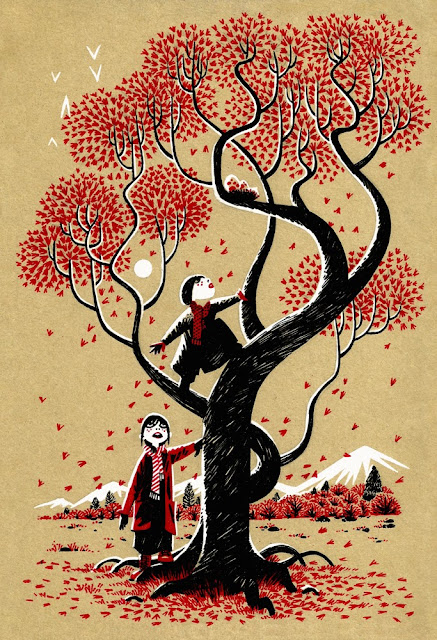 This drawing started out as a formal exercise. I noticed an interesting looking tree while driving home the other day and decided to draw it as best as I could remember. Once the tree was sketched out, it felt like it was placed on the paper in such a way that allowed for some kind of narrative to be added. Somehow that led to the egg-stealing mime kids.
Posted by Fouad Mezher at 3:39 AM 1 comment:

Fouad Mezher
I'm an illustrator working from Lebanon and occasionally dabbling in animation. This blog started out as a straight up portfolio but has gradually changed into a hybrid of that and a sketch diary of sorts.